The Angria Banks are a shallow submerged atoll island located 100 miles off the western coast of India. For decades the existence of this shallow has been known by mariners navigating India’s coastline who steer clear from this navigational hazard, which lies just 20meters from the surface of the ocean. But it was only recently that the Angria Banks have been researched and explored by Marine Biologists to conduct a feasibility study as to make the area as a destination for marine tourism. 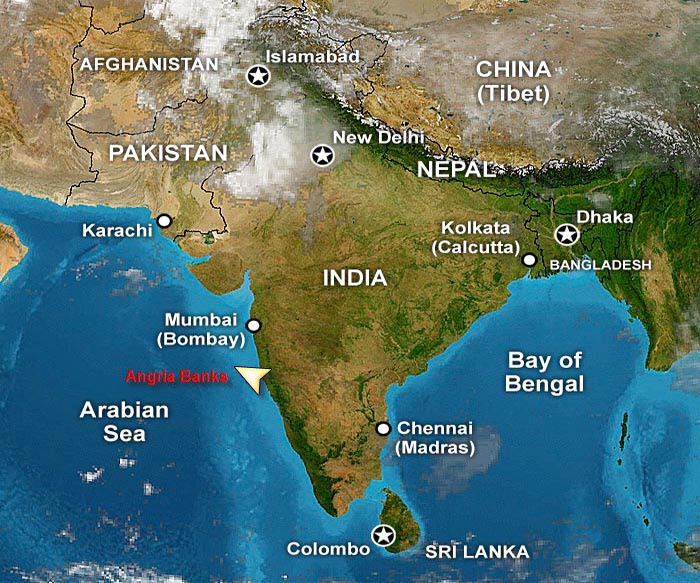 In 2008 the government of India announced a large research grant to to determine the feasibility of further marine tourism in the area with the expectation that the banks contained extensive coral reef that may provide habitat for variety of fishes that could make the area one of India’s best recreational diving destinations.

In a recent Times of India article, India’s Union department of science and technology (DST), conducted a two-day exploratory study of the Angria Banks with five scientists to document and survey the area which spreads over 400 km and only 20 meters below the seas surface. The sea floor surrounding this bank is about 100 feet deep and suddenly rises to just 20 meters The lead scientist Sarang Kulkarni noted that he could not believe the marine wealth that existed there, and claimed it could easily be the largest discovery of coral reef in the entire country because the area is as big as the size of Mumbai which is one of India’s largest cities. The scientists documented at least 1,000 varieties of fish species, and coral life including Great White Shark that inhabit the waters.

This find is great news for scuba divers and a place to watch out for as a prime future scuba diving destination. Its close proximity to the Indian Subcontinent means that the sites are accessible from major Indian cities like Mumbai and Goa with a four hour, high speed boat ride. However to fully appreciate the Angria Banks one would still have to have a liveaboard as there is so much unknown about what treasures and marine wealth inhabits this underwater oasis. Currently however there are no major dive centers offering recreational diving though some may arrange for trips on request. The researchers are pushing the Government to declare the Angria Banks as a protected marine reserve and develop scuba tourism and protect the region from fishing trawlers. So we will simply have to watch and wait to see if the Angria Banks emerges into a prime scuba destination.