Dive Sipadan with the world’s most unique dive resort, the SEAVENTURES DIVE RIG

Rated number 1 on CNN’s tour of Asia’s most spectacular underwater dive sites, Sipadan is the only oceanic island in Malaysia, rising 600m (2,000 feet) from sea bed. Formed over thousands years by living corals growing on top of an extinct volcano off  the south east coast of Sabah, Malaysia,  Sipadan  is well known for its stunning underwater scenery and large numbers of marine species.

Gaining prominence around early 80s, Sipadan quickly became one of the top dive destinations on every divers must–do bucket list and was the favorite place in the world for Jacques Cousteau, the diving world’s most well-known name.  For Jacques who had more or less dived the entire world in the early days of diving with little pollution and plastics in the oceans, to call this place the best, it had to be really spectacular.

Sipadan is surrounded by very rich reef life consisting of both hard and soft coral as well as all manner of reef fish. Sea turtles and white tip reef sharks can be seen on almost every dive and hammerhead and leopard sharks can also be seen at. Huge schools of jackfish, barracudas and bumphead parrotfish are also seen especially around Barracuda Point, which is the most prime dive spot which gave Sipadan its fame. The unforgettable experience of being completely surrounded by schools of  jackfish or barracuda “tornado” as they change direction is mostly around this dive spot.

It is almost impossible to list all the fish and other sea creatures that you might encounter underwater when diving at Sipadan. Among the species are schools of big-eye trevallies, many turtles, tornado-like formations of barracudas, schools of bumphead parrotfishes, giant mantas, eagle rays, schools of tunas, many species of sharks including schools hammerhead sharks, whale sharks and thousands of other species of fish.

In addition to Sipadan, where the diving opportunities may be controlled to retain the diversity, the other dive sites around Mabul and Kapalai also are a feast to watch with multitudes of converging marine life. Blue skies, clear waters, convenient diving and tropical scenery, but it is below the surface where this island really excels.  One of the island’s unique features is a turtle tomb, an underwater limestone cave that features many narrow tunnels and chambers containing the remains of green sea turtles that have become trapped and drowned. This spot however is not open to novice divers and requires a fair amount of experience before trying it. Divemasters and dive guides make sure the proper training and regulations are followed with safety as priority. 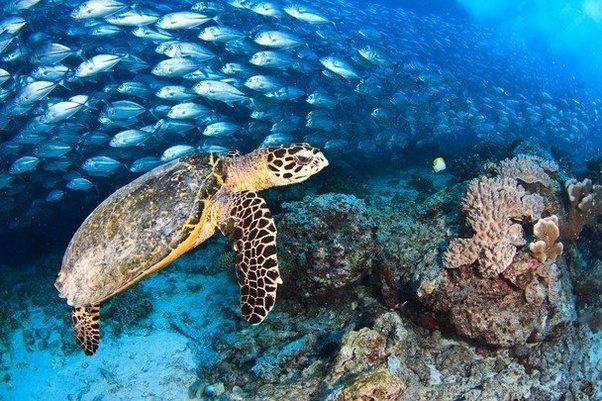