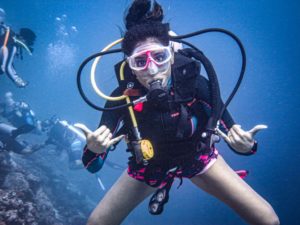 Being a responsible scuba diver is important wherever you are diving. But it’s even more so in India because of our dense population. The great news about being a responsible scuba diver is that it has a major feel-good factor, and together we can make a difference and raise awareness – all of which leads to healthier dive sites and the ongoing development of scuba diving in India. Here are some tips to responsibly scuba dive in India, how they help in your underwater adventure, and how they can help you in your daily life too!

1. Get certified to scuba dive in India

If you want to scuba dive, get certified! This not only increases your personal safety underwater, it also means you’ll learn about how to dive to limit your impact on the coral reef and marine life. This in turn means that dive sites stay preserved for you and other divers to enjoy, dive after dive. If you are not certified to dive, sign up for the PADI Open Water Diver Course – you can even start learning online from home now! Once you are a certified diver, you’ll be recognized as such by dive centers all around the world. Yes, you will have more places to explore and more buddies to meet and dive with!

Did you know that corals are living animals? You need to treat corals with the same respect you would give other creatures. Touching corals can not only lead to nasty stings, but you can actually infect the reef. Contamination from humans can be deadly for coral reefs, and for the fish living there. Hard coral is often covered with a thin layer of live tissue which protects it. When touched by humans, this layer gets damaged. The basic rules of sustainable scuba diving are: (1) don’t touch the corals and (2) don’t take any corals or shells out of the ocean. 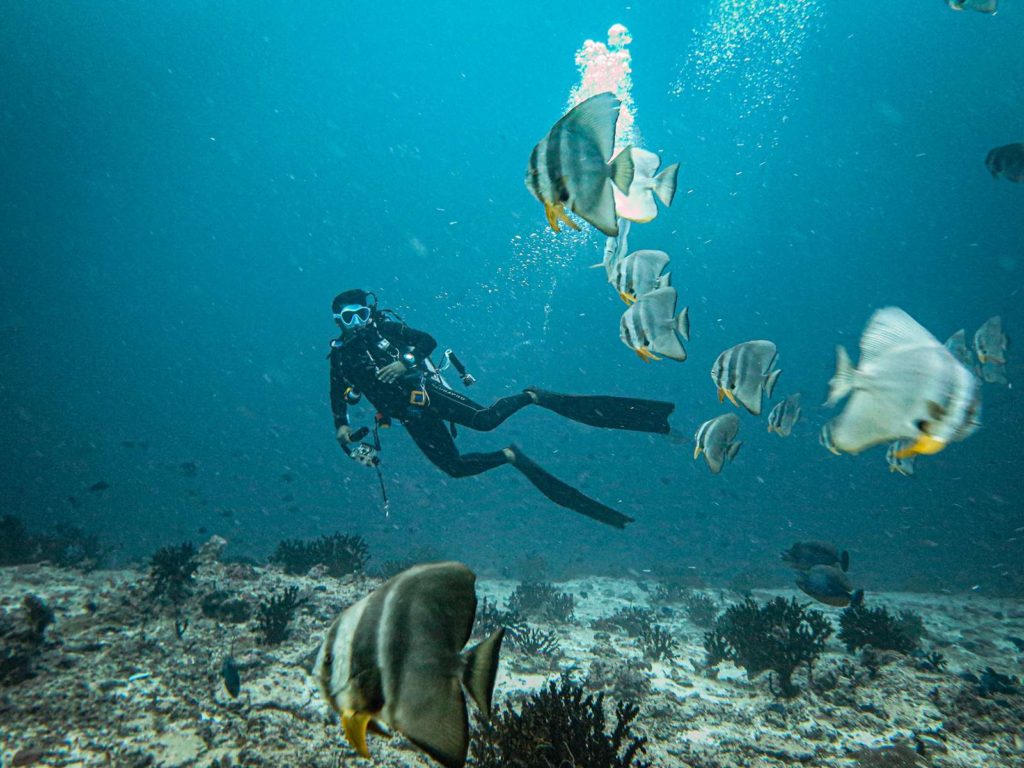 3. Be in control of your movements

Having good control underwater comes through proper training and supervised practice. If you are not a certified diver, sign up for a Discover Scuba Diving program. You’ll learn some basic skills to keep you and the reef safe, followed by an amazing dive in the ocean with an instructor. If you want to get certified, take the Open Water Diver Course and commit to learning to scuba dive in India. Want to develop your diving skills further? Why not take the PADI Advanced Open Water Diver course? Being in control of your movements makes you look more accomplished underwater and you’ll also be ensuring the longevity of the reef by not making contact with it. As an ‘in control’ diver, beginners will look up to you and follow your example.

Divers with good buoyancy control are looked up to wherever they dive. Be a good role model with excellent diving skills, and you’ll gain the respect of your buddies in no time. Good buoyancy control also means that your air will last longer so you can dive for longer. You’ll be able to avoid crashing into a reef or making contact with the bottom. Also, you’ll also be able to maneuver better, which means you can get closer to the marine life and corals. You’ll reduce your stress and anxiety levels in the process as well. Say hello to more relaxing and comfortable dives. 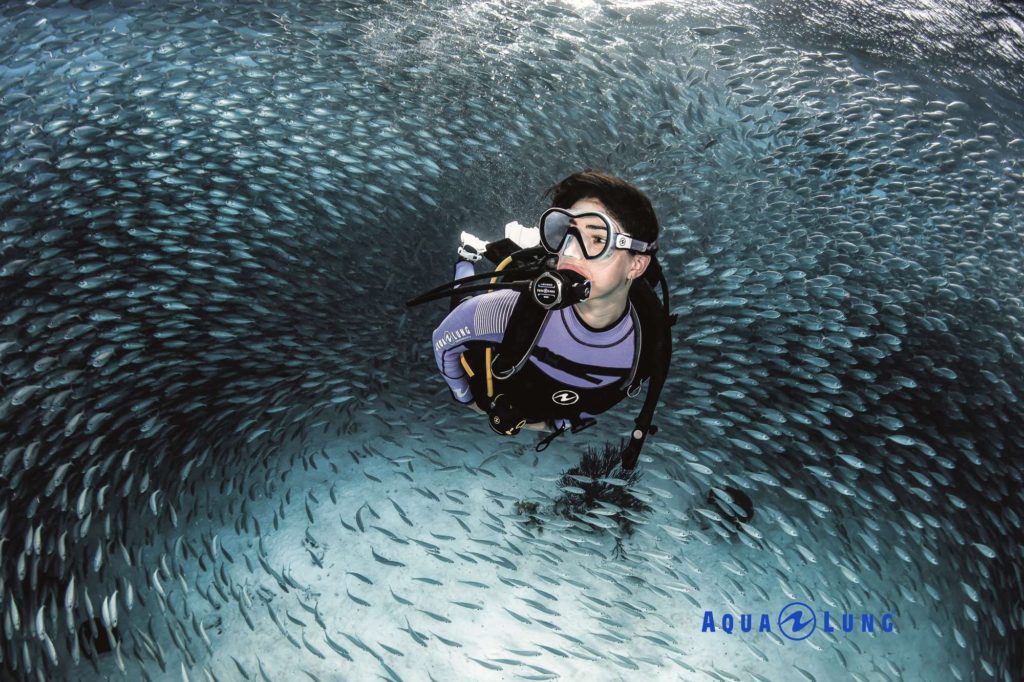 5. Invest in the right equipment

Scuba diving in India is still a relatively new activity. There’s yet an element of ‘cool-ness’ attached to it. You have to have the right equipment if you want to look and feel great underwater. And it has to fit correctly! Over-sized gear or a too-snug fit are both uncomfortable and unsafe. Ask us about which scuba diving equipment you should have and how it should fit for the best performance. If your gear isn’t the right size for you, you’ll struggle with buoyancy and are more likely to damage the reef, since your focus remains on your gear and not on your surroundings. All your scuba gear needs to be tucked away. Nothing should be trailing or dangling, as it can cause to damage to the reef or even lead to entanglement.

For the sake of both land and marine species, it is increasingly important today to be responsible and try your best to reduce your environmental footprint. Never throw trash, even organic, in the ocean. Pick up any trash you see while diving, and others will follow your example. Role model good behavior at home too. Try to reduce your use of plastic by using eco-bags for your shopping and think twice about buying items that are overly packaged. In India, we generate a huge amount of plastic waste. Be a trailblazer and get active on social media about what you are doing to reduce your own plastic consumption.

7. Educate yourself and others

The more people know about something, the greater their interest in protecting it. Learn about corals and marine life and share your findings with others. Not only will you impress them with your knowledge, but you’ll also help create a new generation of educated Indian scuba divers who, like you, want to protect our amazing underwater world.

8. Be an ocean advocate

Being a scuba diver is not just about what we do when we are diving in India. It’s about our behavior at home too. Be a diver everyday by becoming aware of global issues such as climate change and overfishing. Join online conservation groups and be a leading voice on social media. We all know the power of people, so help start a wave of awareness and change!

Share you underwater pictures and talk with your friends, family and neighbors about your adventures and experiences when scuba diving in India. The more Indian divers there are, the more powerful our collective voice becomes.

Are you ready to put these points into action? Get started by booking a PADI scuba diving course, or your next dives now! Contact us via our online contact form or send us an email to: holidays@planetscubaindia.com

The islets were in a group in the Gulf of Mannar, between India and Sri Lanka.

The Indo-Pacific region is considered to contain some of the world’s richest marine biological resources.

The group’s 21 islands and islets are protected as part of the Gulf of Mannar Marine National Park, covering an area of nearly 560 sq km (216 sq miles).

Fishermen had indiscriminately and illegally mined invaluable coral reefs around the islets of Poomarichan and Villanguchalli for many decades, said S Balaji, chief conservator of forests and wildlife for that region of Tamil Nadu state.

“The absence of any regulations prior to 2002 led to illegal mining of the coral reefs, which came to an end when environmental protection laws were enacted,” he told the BBC Tamil Service.

Mr Balaji said rising sea level as a result of global warming was also a factor behind the islands’ submergence.

But this was questioned by Simon Holgate from the Proudman Oceanographic Laboratory in Liverpool, UK, who said observations showed that the sea level in the region had been rising slower than the global average.

“I think that global sea level rise had little impact on the disappearance of these islands and it must be due to other reasons, possibly the mining of coral reefs,” Dr Holgate told BBC News.

Though these islets were only 3-5m (10-15 ft) above sea level, their submergence sounded an alarm bell about the danger many more small islands faced in the long run, according to Mr Balaji, who is also director of the Gulf of Mannar Biosphere Reserve Trust (GOMBRT).

The Gulf of Mannar was chosen as a biosphere reserve by the Indian government in 1989 because of its biological and ecological uniqueness, and the distinctive socio-economic and cultural profile shaped by its geography.

Most of the 21 islands are uninhabited, and the corals were mined for use as a binding material in the construction industry, as they were rich in calcium carbonate.

The biosphere reserve is a storehouse of about 3,600 species of marine flora and fauna.

Many more wait to be studied, said Deepak Samuel, marine biologist and project associate with the Energy and Environment Unit of the UN Development Programme (UNDP).

“The Gulf of Mannar is a unique reserve with ecosystems like coral reefs, mangroves and seagrass,” Mr Samuel said.

“It is a nursery for shell and fin fishes, which means the entire breeding and juvenile raising takes places in these three ecosystems.”

More than 300,000 fishermen depend on the Gulf of Mannar for their livelihood. It is also the dwelling place for many endemic species, notably the dugong or “sea cow”.

Studies have proved that this gulf is home to 117 species of corals belonging to 37 genera, and 13 out of the 14 species of seagrasses in Indian seas.

The area has also been famous for pearl harvesting for over 2,000 years.

According to marine biologists, a quarter of the 2,000-plus fin fish species in Indian waters are in this gulf, making it one of the region’s most diverse fish habitats.

Most of the islands are uninhabited, and rise just a few metres above sea level

I hope you have all booked your places for our Maldives Livaboard Trip in September. If you haven’t this is what you are going to miss out on.I pity you[youtube=http://www.youtube.com/watch?v=yihoIvUBDM4]

A very common question and here is the most sensible answer to that question.

No. There are around 300 different species of sharks, only 40 of which are known to have attacked
people. One of the most dangerous sharks in North America is the great white shark, found along the Pacific coast between Mexico and southern Canada. Another one to watch out for is the tiger shark, which lives in the warmer Atlantic waters off the coast of Florida and around the islands of Hawaii. Shark attacks really are pretty rare. For instance, there are usually only two or three reported in Hawaiian waters each year. There are different ideas about why sharks attack people. Tiger sharks, it seems, may attack because they get confused in murky water — and mistake surfers in black wet suits for seals. Reef sharks seem to attack because they are territorial animals, protecting their piece of the sea. The whale shark, which has 5,000 teeth and can grow up to 50 feet long, is the largest type of shark. However, it prefers food like small fish, shrimp and plankton, and therefore is not dangerous to people.

We recently celebrated the 1st anniversary of the Bangalore Dive Club. It was a fun outing with all members coming together to create a party atmosphere. The Bangalore Dive Club has also decided to take up the cause to stop shark finning in our Indian waters.  Let’s hope to see a bigger turn out for the next meeting and hopefully we can bring more attention to the cause as well. SAVE THE SHARKS! STOP FINNING