After missing out last weekend due to unforeseen circumstances, we are bringing the DSD sessions back this coming weekend. Bangalore can now continue to experience the thrill of diving underwater right here in town. The sessions start this Saturday, August 6, at the St. Josephs Indian high School pool at 10:00 AM, and bookings are now open! Check out the pretty little graphic below, and contact us for confirmation of your booking. Let’s go dive! 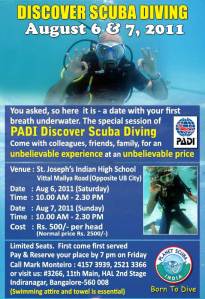 Well, this is certainly an exciting time here at Planet Scuba India!

We have two fantastic dive trips planned in August-September this year, and the response has been overwhelming! We announced a liveaboard trip to Maldives last month, starting from August 7, and within a month, all 22 seats were booked! So vehement was the response, that we were almost forced into planning a second liveaboard to Hanifaru Bay! The second trip is starting from the 22nd of August, and goes on till the 28th. Seats are still open for this trip and you can email Mark for more details like pricing and prerequisites. He’ll be more than happy to help you out with the planning of the trip.

Incidentally, this is the last time the Maldives government is allowing liveaboards and active diving in Hanifaru Bay for fear of the delicate balance being upset. It’s the feeding season for the Manta Rays and you don’t want to miss this feature!

We also have a dive trip planned to Trincomalee, Sri Lanka, starting from the 30th of August. This is not a liveaboard, but rather an all expense paid 5-day dive trip to one of the most pristine dive spots in the world. Some of the world’s best wreck diving happens in these waters, and you get to be a part of this amazing experience. Again, Mark’s the guy for you to get in touch with for more information on this.

In other news, we are thrilled to play host to Mr. Hans Ullrich, the PADI regional manager South Asia, who  is visiting Bangalore this week! We are planning a meet & greet party for him, to give him a chance to meet and interact with divers and dive enthusiasts in the city. It’s a BYOB thing, and you are invited! Yes, you guessed it. Email Mark for more info!

As promised here is a write-up on drift diving speciality. This will be available on the Maldives Trip and it highly recommended as Maldives is one of the best places to enjoy drift diving.

If until now your experience has been that current are something you fight to swim against; drift diving will give you a whole new perspective. Drift diving grew out of the philosophy, “if you can’t beat them,join them” and is the prevailing practice in many areas with nearly continuous strong currents.

Drift diving can give you a real adrenaline pump. At some drift dive sites,the current rips you along far faster than you could swim, or even cruise with a DPV (Dive Propulsion Vehicle), sailing you along effortlessly. Some divers compare drift diving in clear water to hand gliding or horizontal sky diving but no airplane needed and you don’t have to worry about your chute opening.

All you have to do right now is contact us and book for your drift diving speciality for the Maldives Dive Trip happening this month. Don’t miss out on a great oppurtunity!!

Although the Maldives are known the world over for the stunning beaches and azure waters that typify the tropical idyll, its life beneath the water’s surface is becoming ever more respected by divers in the know. The Maldive Islands have some excellent coral reefs, but it’s the abundance of fish life throughout the country that sets it apart from other dive destinations.

Most diving in the Maldives is drift dives from liveaboards where you allow the current to move you along. Due to the myriad channels and passages between the atolls, the currents sweep and play throughout the island chain so that nutrients are always on the move. This accounts for the vast numbers of fish enjoying the passing feast and you can expect to see Napoleon wrasse, parrotfish, snappers, barracudas, jacks and sweetlips in every site where the water flows.

In the channels, you can explore the caves, caverns and overhangs where soft corals proliferate, and there is a riot of colourful sponges, invertebrates and gorgonian fans all profiting from the nutrient-rich water. There are also plenty of cleaning stations where cleaning wrasses and shrimps service the larger marine species.

Inside the atoll lagoons you often find pinnacles of rock vaulting up almost to the surface. These are known locally as ‘Thilas’ and are often bejewelled with sessile life forms. These formations bring water up from the ocean floor against their walls, feeding the sponges and soft corals that cling to its sides as well as creating an environment that supports a plethora of crustaceans and schools of resident fish.

Slightly removed from the reefs, you are likely to spot the pelagics that frequent the Maldives, including manta rays and eagle rays and a variety of sharks including the mighty whale shark. Wherever you look there is likely to be something of interest going on and for many it is in the shallows where the best of the action takes place. Here the clear water, brightly illuminated by the sun’s rays and playing host to great numbers of fish, provides an ideal environment both for photographers and divers alike.

During the El Niño of 1998 some shallower areas of the coral reefs have been adversely affected by bleaching. However the accepted view is that while the reefs are returning to their former colourful glory, the marine life has never dwindled and indeed many believe it has increased in numbers over the past few decades.

We recently celebrated the 1st anniversary of the Bangalore Dive Club. It was a fun outing with all members coming together to create a party atmosphere. The Bangalore Dive Club has also decided to take up the cause to stop shark finning in our Indian waters.  Let’s hope to see a bigger turn out for the next meeting and hopefully we can bring more attention to the cause as well. SAVE THE SHARKS! STOP FINNING