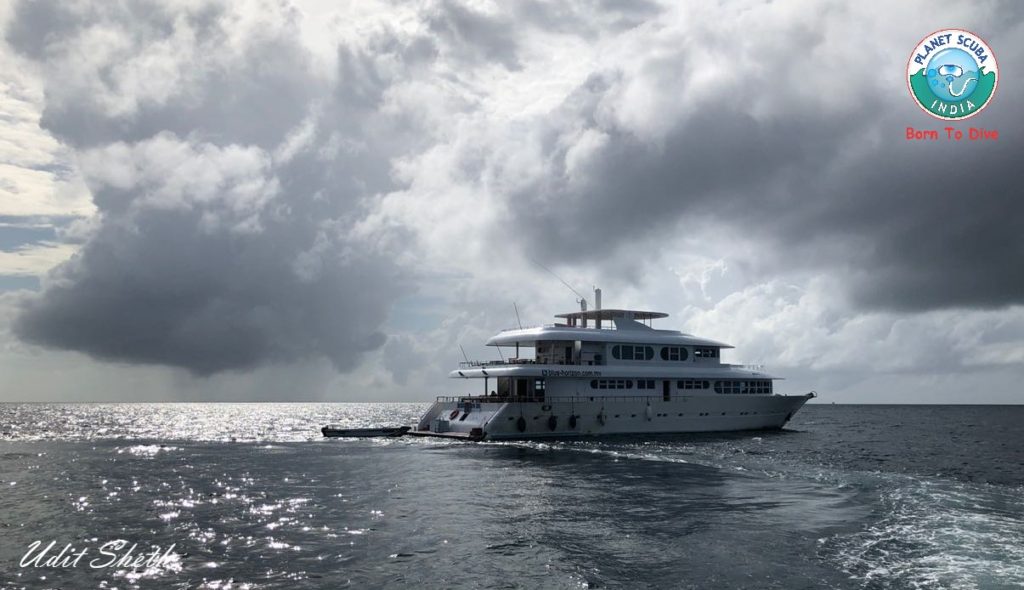 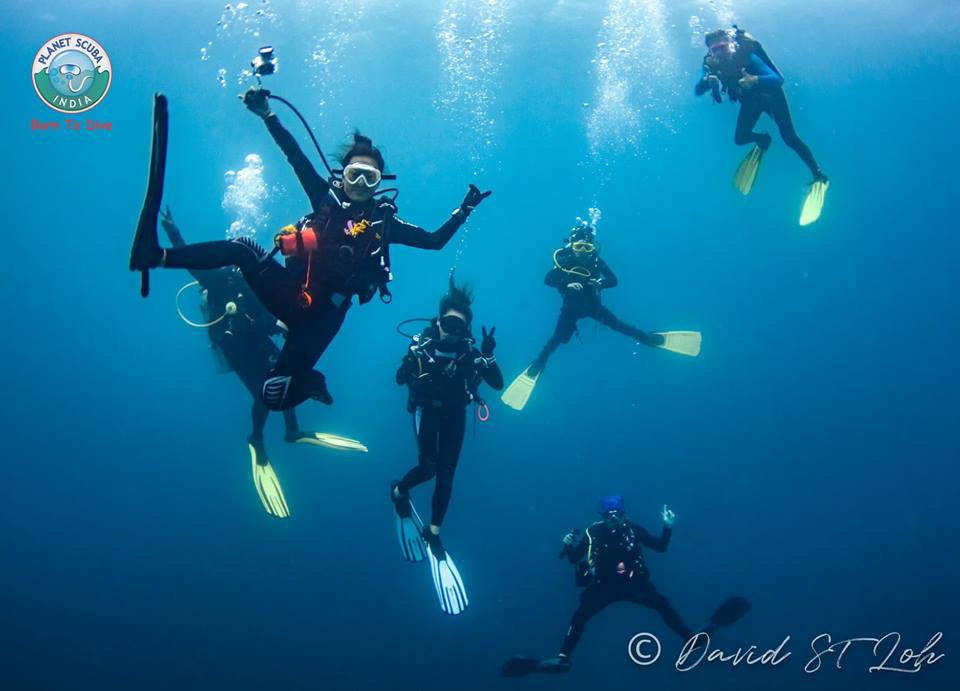 What happens when on the initial day of your scuba diving holiday itself you see manta rays and dozens of white tip and grey reef sharks? Well, the stakes just get higher for the dive guides. But then again, this is the Maldives! The tropical paradise made up of 26 atolls, with some of the best scuba diving sites in the world. And every dive here is simply spectacular.

For Planet Scuba India, this was our third trip to the Maldives in 2018. And, come to think of it, it seemed like each diving holiday was trying to supersede the previous one. This time around, our liveaboard of choice was the Horizon 3. From October 7-13, this luxury liveaboard was home to 23 guests of different nationalities—Indians, Singaporeans, Taiwanese, Malaysians. Including two divers from India completing their PADI Open Water Diver course. They then went on to complete their PADI Advanced Open Water Diver course, along with three other scuba divers from India.

This diving holiday also had a couple of non-divers (who enjoyed themselves just as much, if not more) and some of the best photographers. You need only take a look at the pictures to nod in agreement.

It was six fun-filled days of eat, sleep and dive! And, of course, swapping of hilarious, unforgettable scuba diving adventures.

Here are some of the highlights of one of our best diving holidays in the Maldives.

First dive of the day at Lankan Manta point. This dive site, at the southeastern outer reef of Lankanfinolhu Island, is one of the most popular cleaning stations for manta rays in North Male Atoll. And, as luck would have it, on the day of our dive, the manta rays showed up in all their magnificent glory. We took a giant stride off the dive dhoni, descended a few meters, and gasped in awe (well, as much as one can gasp with regulator in mouth), as a manta ray elegantly swam past. Not knowing then that this was just a prelude of what was to come a few minutes later. Our dive guide led us to the coral blocks of the cleaning station. And, lo behold, heads swiveled in every direction as mantas glided in, out, and around in circles.

Here’s the thing about cleaning stations: they are a riot of colors. It is not just the mantas vying for attention but brightly hued cleaner fish, vibrant corals, and a motley of sea creatures. There is just so much to take in that you rue the fact that your neck isn’t able to turn more than 90 degrees. Just how are you supposed to see the cuttlefish whooshing past behind your back, when you eyes are so intensely trained on the spectacular subjects in front of you?!

Subjects that came to visit us later that night. Bang at dinnertime! Who cares about food when you can watch a manta ray circle around the back of your boat instead. Well, to be fair, it was dinnertime for the mantas too. And one somersaulted away, mouth agape, sieving marine organisms out of the water and into its stomach. Round and round it went, as 23 heads (more if you count the crew) stuck out of the sides of the boat watching in fascination. That is, till it had had its fill and glided away as surreptitiously as it had appeared.

Bathala Maaga Kanthila, North Ari Atoll. Even though this dive site, which we visited right after the underwater manta ray spectacle, had grey reef and white tip sharks. Not to forget, schools of yellowback fusiliers and a huge Napoleon wrasse that stole the show. It was the dive at Fish Head at North Ari Atoll that remains etched in our memory. Perhaps it was the story that did it for us. As our dive guide, Marko, told us during the briefing that at one time this was a famous fishing spot. But when the fishermen reeled in their catch, all they got was the heads of the fish. The sneaky sharks had eaten up the rest. Or perhaps it was the dive site itself. With its multiple ledges and picturesque overhangs replete with fan corals and abundant fish life.

Again, just a few meters and a few minutes into the dive, we spotted sharks right below us. Our dive guide took us on a detour, around one ledge and onto another below it. Having us swim stealthily to not disturb the unfolding drama. Sharks darted around, remoras in tow, while parrotfish hid in crevices in corals. And clownfish peeked out of anemones. Crustaceans moved a centimeter at a time to not be spotted.

It was 45 minutes of spying on sharks. Eyes wide in wonderment; cameras trained at the action. Grey reef sharks and white tip sharks, and also barracudas—all the predators at their A-game. Little wonder then that Fish Head, also known as Shark Point or Mushimasmingili Thila, is listed as one of the most famous dive sites in the world.

We just can’t get enough of sharks. Especially on night dives. Two months later, we were back during this diving holiday too to be bumped into by nurse sharks. Simply put, the dive at Alimatha Jetty, Vaavu Atoll, offers an adrenaline rush like no other. And to think that all you need to do is kneel on a sandy bottom. While nurse sharks, stingrays, travellies whip around you foraging for food. If we had to bet on a species, it would be the crafty travellies, who gulped down the food faster than the nurse sharks and stingrays could wonder: ‘where the heck did it go?’. It was a surreal experience that no amount of photographs or videos could do justice to. Though the ace photographers did manage to capture little snippets of the frenzy.

Back at the boat after the dive, and the nurse sharks came visiting. Who would have thought that after all the action underwater, there would still be so much excitement to see them. Cameras were whipped out. Facebook Lives were posted. Frantic video calls were made to friends to gloat about what they were missing. 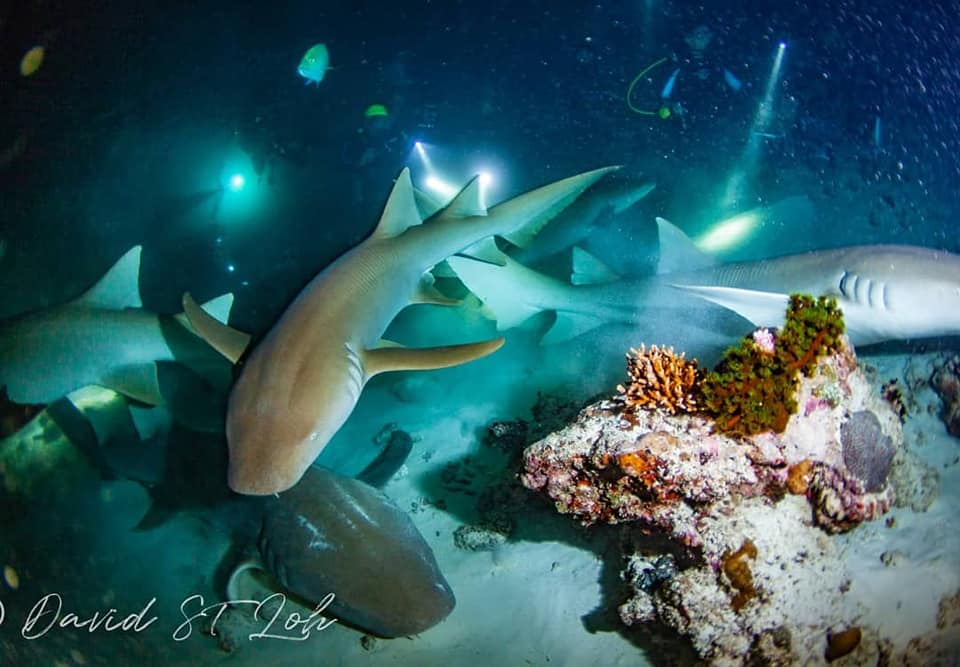 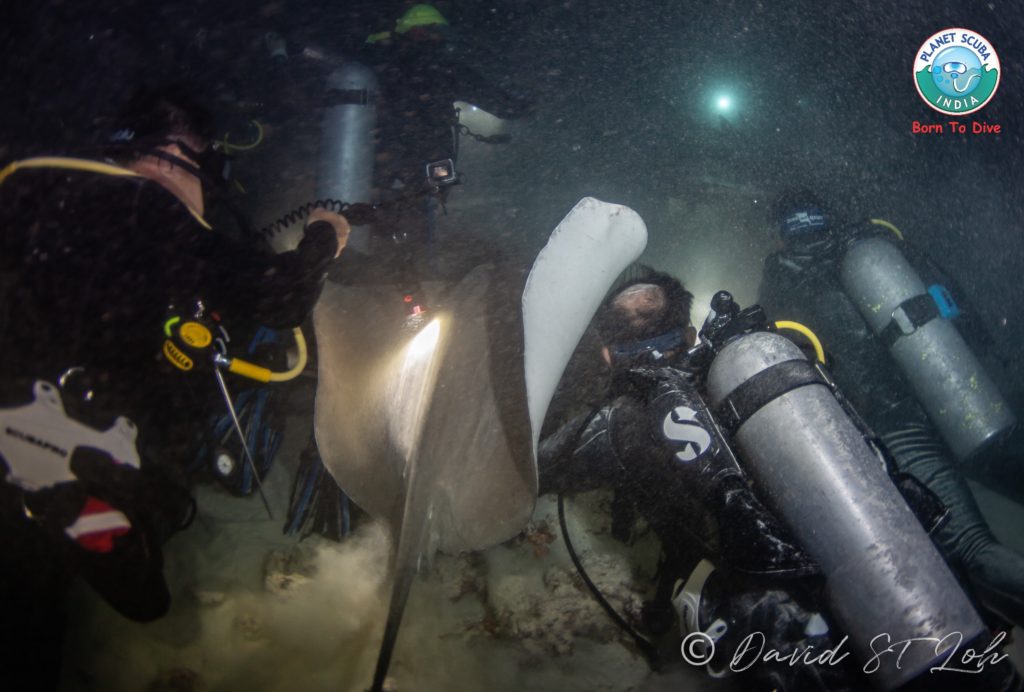 There’s only one thing in the Maldives that can get divers into the water faster than you can blink. And that’s the much-awaited sound of someone screaming: ‘whale shark’! On this diving holiday, we snorkeled to see one just after our dive at Dhigurah Beyru, South Ari Atoll; a dive site that counts whale shark encounters as one of its highlights. It was a mad jumble of divers, cameras and fins, as a lonesome whale shark swam calmly, feeding its way through the waters. Seemingly oblivious to the mayhem unfolding above, for just a glance of it. 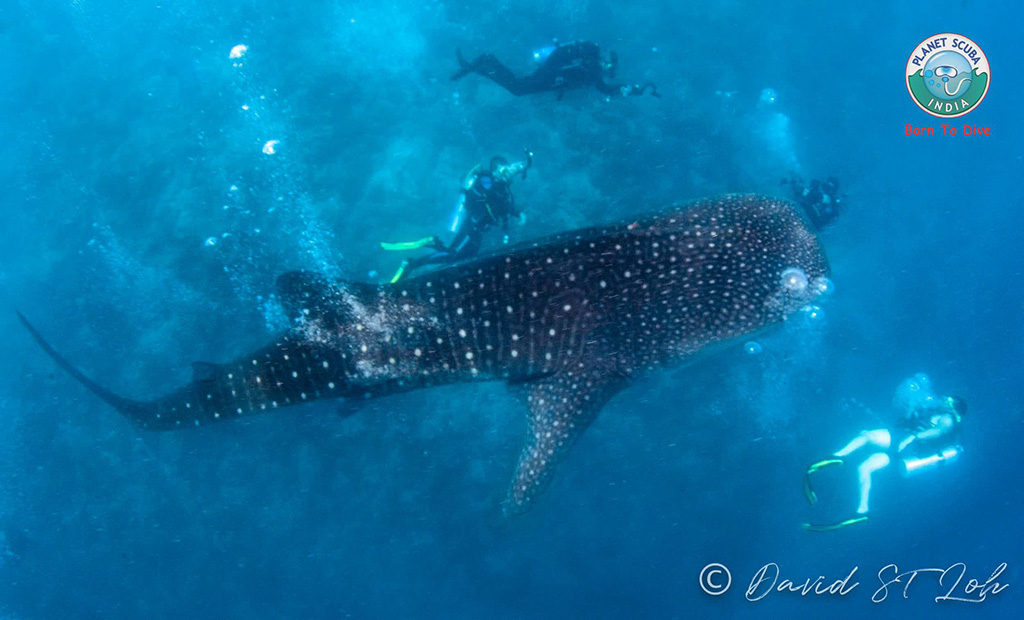 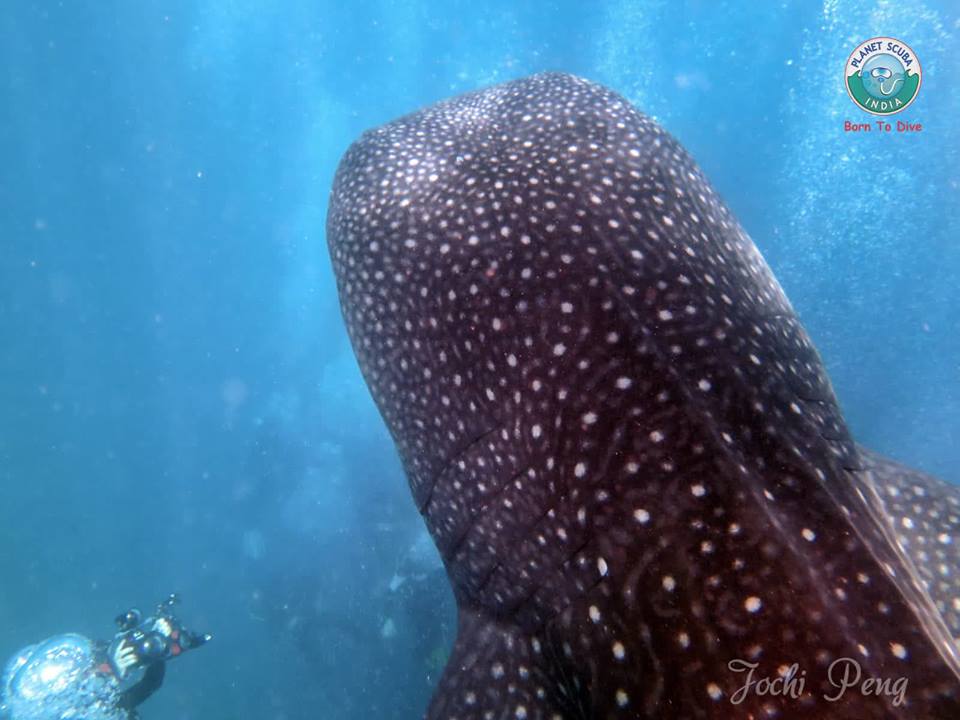 Colloquially, UMS, or usual Maldivian stuff, is a term used to describe everything from soft corals to giant turtles. That’s because every dive in the Maldives reveals spectacular sights and secrets. Marble rays hunting together. Octopuses, tentacles intertwined, in a sort of a love-hate dance. Mantis shrimp peeking out from its coral den. Scorpionfish in perfect camouflage waiting for its prey. Turtles gorging themselves silly on sponges. Sweetlips hanging out under overhangs. Moray eels getting spruced up by banded coral cleaner shrimps. Shoals of glassfish darting in and out of a wreck. Feather starfish climbing over hard corals. Stingrays swimming in and out of camera range. Schools of bannerfish, yellowback fusiliers, batfish, red snappers just going about their day underwater. And a liveabord full of happy divers. ‘Coz you just couldn’t ask for a better diving holiday destination than the Maldives. 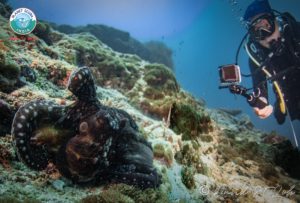 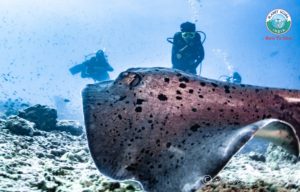 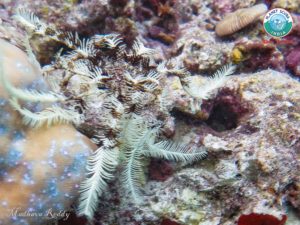 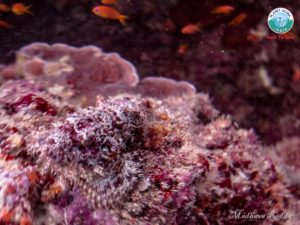 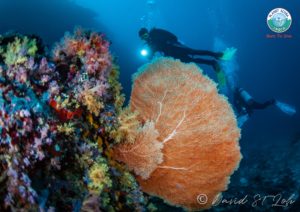 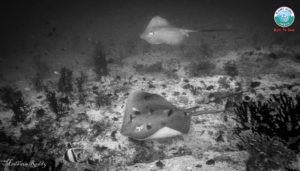 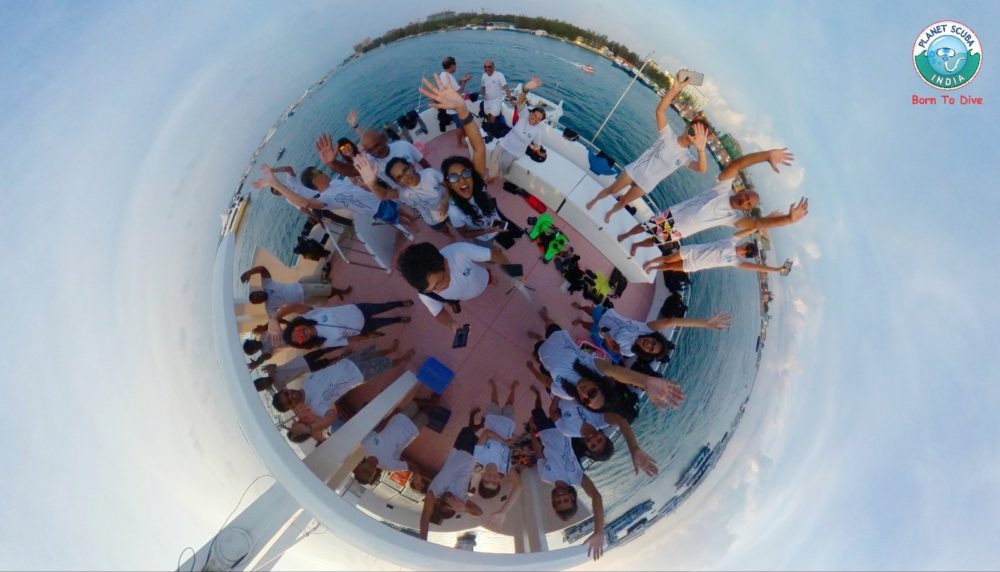 Well, this is certainly an exciting time here at Planet Scuba India!

We have two fantastic dive trips planned in August-September this year, and the response has been overwhelming! We announced a liveaboard trip to Maldives last month, starting from August 7, and within a month, all 22 seats were booked! So vehement was the response, that we were almost forced into planning a second liveaboard to Hanifaru Bay! The second trip is starting from the 22nd of August, and goes on till the 28th. Seats are still open for this trip and you can email Mark for more details like pricing and prerequisites. He’ll be more than happy to help you out with the planning of the trip.

Incidentally, this is the last time the Maldives government is allowing liveaboards and active diving in Hanifaru Bay for fear of the delicate balance being upset. It’s the feeding season for the Manta Rays and you don’t want to miss this feature! 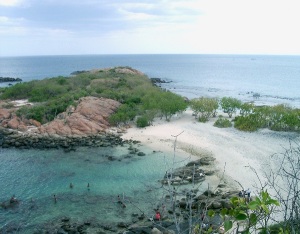 We also have a dive trip planned to Trincomalee, Sri Lanka, starting from the 30th of August. This is not a liveaboard, but rather an all expense paid 5-day dive trip to one of the most pristine dive spots in the world. Some of the world’s best wreck diving happens in these waters, and you get to be a part of this amazing experience. Again, Mark’s the guy for you to get in touch with for more information on this.

In other news, we are thrilled to play host to Mr. Hans Ullrich, the PADI regional manager South Asia, who  is visiting Bangalore this week! We are planning a meet & greet party for him, to give him a chance to meet and interact with divers and dive enthusiasts in the city. It’s a BYOB thing, and you are invited! Yes, you guessed it. Email Mark for more info!